Aidan Turner was dressed in character on Wednesday as filming commenced on the Italian set of forthcoming biographical drama Leonardo.

The Poldark star plays brilliant but tormented renaissance painter Leonardo da Vinci in the new series, which will endeavour to explore the artist's life through some of his best known works.

And with production back in full swing after a three month suspension prompted by the coronavirus health crisis, Turner, 37, was joined by co-star James D'Arcy as they prepared to film their latest scene in the grounds of Tivoli's 16th century Villa d'Este.

Sporting a long shoulder length wig and thick beard, D'Arcy was almost unrecognisable as he readied himself for another scene as Ludovico Sforza, Leonardo's patron & Duke of Milan.

The actor, 44, was had in hand with beautiful Italian actress Miriam Dalmazio - who plays Sforza's wife Beatrice d'Este - as he made his way onto the bustling set.

With cameras ready to roll, the three stars chatted among themselves as members of the production team put the finishing touches to their exterior set.

Completely immersed in his role as Sforza, D'Arcy was later seen engaged in a stern conversation with Turner's Leonardo, as goblet bearing extras gathered for what appeared to be an outdoor celebration. 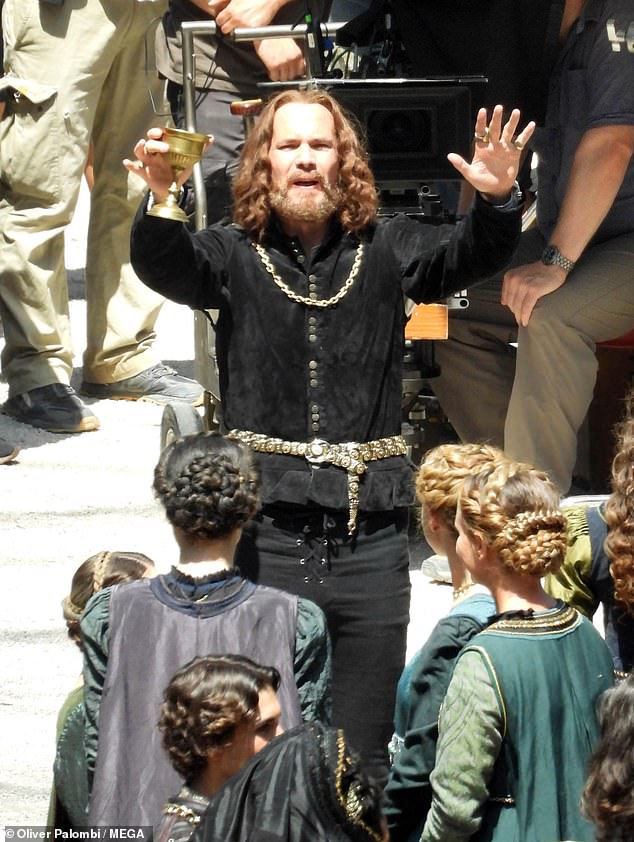 Co-star: Turner was joined by James D'Arcy, who plays Leonardo's patron Ludovico Sforza, as they prepared to film their latest scene in the grounds of Tivoli's 16th century Villa d'Este 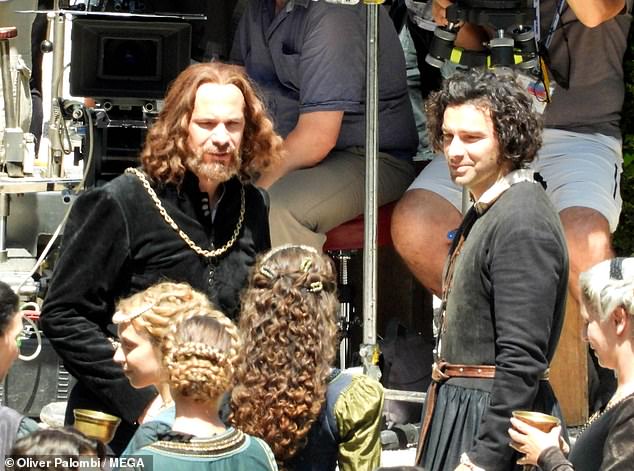 Reunited: The two actors chatted as they waited for cameras to roll in Italy on Wednesday

Cast and crew returned to work on June 15th after filming ground to a halt following the spread of coronavirus COVID-19.

The show charts the artist's life from childhood to becoming one of the world's most beloved geniuses of art and science.

Born in 1452, Leonardo is one of the greatest individuals of the last millennium, he is known primarily for his contributions to the art world, including paintings like the Mona Lisa and The Last Supper. 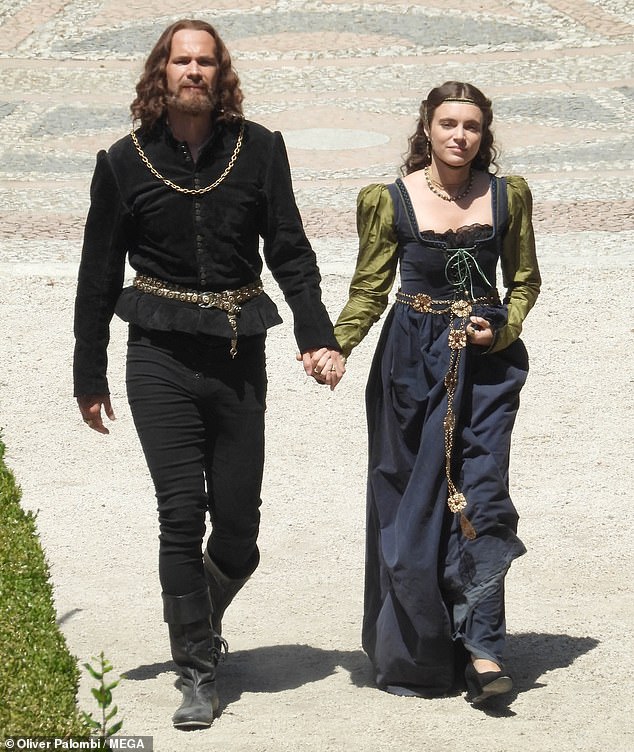 In good company: D'Arcy was had in hand with beautiful Italian actress Miriam Dalmazio - who plays Sforza's wife Beatrice d'Este - as he made his way onto the bustling set 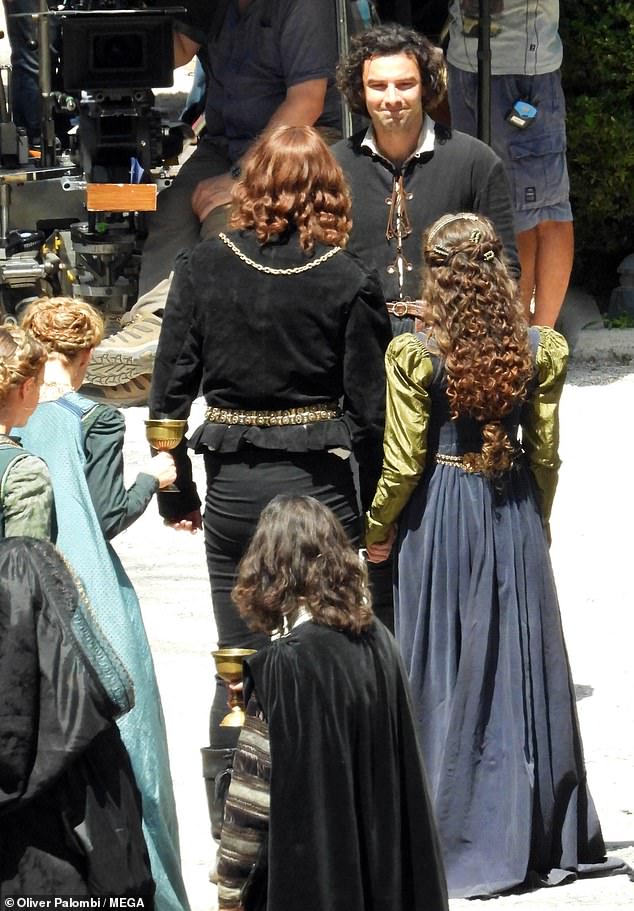 Let's talk: The three stars were joined by goblet bearing extras as they filmed what appeared to be a social gathering

According to The Hollywood Reporter, Leonardo will 'unlock the mystery' behind Da Vinci's genius as well as explore a tantalising secret in his life.

The new series was created by The Man In The High Castle showrunner Frank Spotnitz and Sherlock writer Steve Thompson, the show will be directed by Daniel Percival and Alexis Sweet. 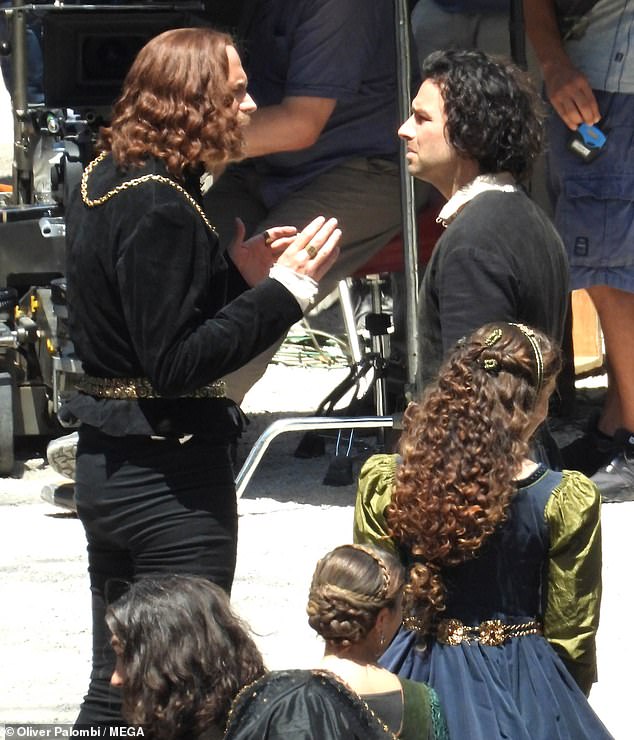 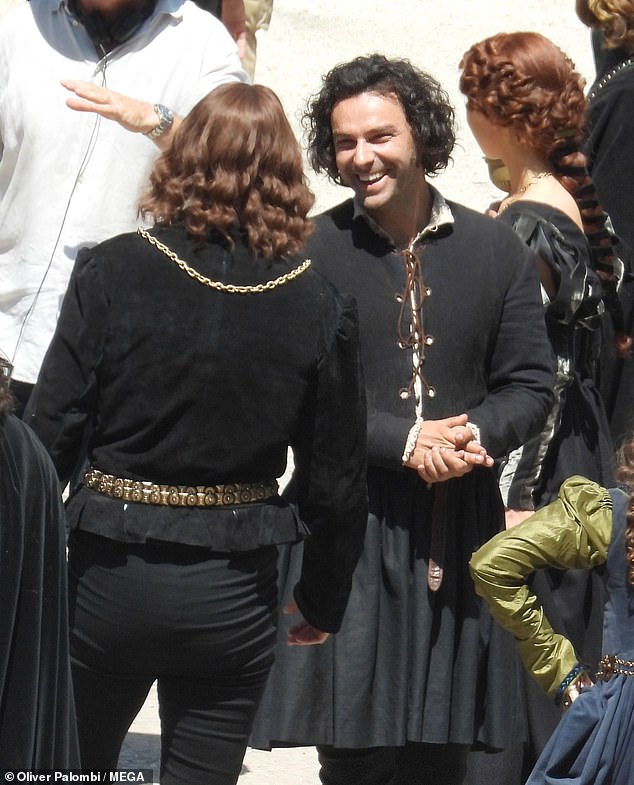 That's better: But there were smiles all round after cameras stopped rolling on the Italian set

Speaking about the show, Frank, whose company Big Light Productions is co-producing the drama, admitted it was 'both a challenge and an honour' to portray Da Vinci's life on the silver screen.

In a statement, he said: 'It’s both a challenge and an honour to dramatize the life of one of the most fascinating people who ever lived.

'Leonardo is constantly surprising, and despite his fame remains an enigma more than 500 years after his death.

'We’ve uncovered sometimes little-noticed clues about Leonardo’s life and pieced them together in a puzzle that attempts to reveal the humanity behind the genius.'

While Luca Bernabei, CEO of Lux Vide who have produced the drama, added in his own statement: 'Leonardo’s story invites us to believe in humanity, in its extraordinary abilities and the possibility of looking to the future beyond those horizons that today appear as overwhelming obstacles.'

Leonardo is currently set for release in 2021, but has yet to find a distributor in either the UK or the USA.

There are more photos in our gallery for Leonardo.